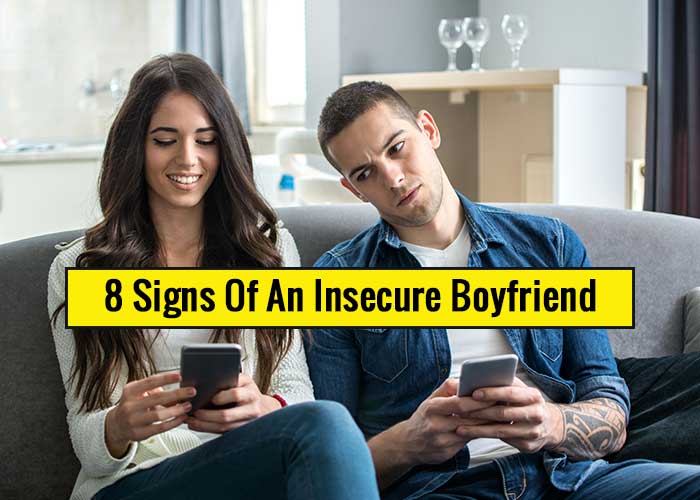 It is fine to be protective in a relationship, fine to be a concern at times when you love that person too deeply and is scared to lose them but what happens when this protective nature and concern turns into insecurity, when it captures you in their nature of insecurity, when your boyfriend is too insecure about you. You feel suffocated, you feel imprisoned in a relationship. It does happen when someone tries to get in your nerve and start disturbing you mentally, emotionally. Here are 8 signs of an insecure boyfriend.

1. He tries gaining your sympathy:

2. He is jealous and is uncomfortable with your friends:

Also Read : How To Handle A Narcissist Person?

3. He keeps checking your phone, he stalks your social platform:

As soon as you meet, the first thing he does is goes through your phone, go through your call history, inbox, messenger, WhatsApp and all the social media platforms. He makes sure that he is in the top list of your chat list. He stalks you in all your social media and what action you are performing out there. And trust me if this is happening to an extent you should get rid of this spy.

4. He doesn’t give you space, he tries to consume it all:

He will make sure that you give him all your time and you don’t get time for yourself. He won’t give you space, he won’t give you time for yourself. You will feel that he is ruling all your personal space. You will feel like you don’t have privacy, you don’t have your own life, in fact, you are living for him and only him. If this happens it is one of the signs of an insecure boyfriend.

5. He argues over small things:

Arguments between you both start over small things. He keeps arguing with you all the time no matter whether the issue is too small that doesn’t even need discussion but he starts an argument over it. If he does it all the time, it is one of the signs of an insecure boyfriend.

Also Read : 5 Most Possessive Partners According To Astrology

6. He doubts you all the time with no reasons:

Does he keep checking your gallery, asking lots of questions to you about your friends, about with whom you are with? When he does this and starts doubting you all the time it is automatically stated that he is insecure. And when there is no trust in a relationship it is hard to handle it.

7. He gets too aggressive in a conversation:

Does his mood swings at a faster rate? If he gets too aggressive over little things it is one of the signs of an insecure boyfriend. When he gets aggressive over small issues and tries dominating you all the time. It shows how insecure he is.

8. He stops you from doing many things:

Don’t wear this, don’t go here, don’t hang out with them, don’t post this. When there comes to do’s and don’ts, there automatically shows that insecurity in a person. He cannot stop you from living your life the way you wanted. But if he does, you should take a step back from such a relationship. It may make you empty from within.