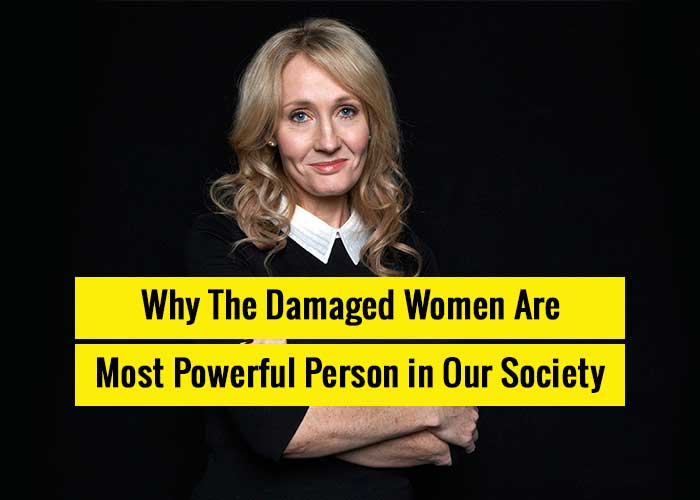 Damaged Women Are The Most Powerful

They call damaged, they call broken, they call weak but if one can survive damaged how can one be weak. And if one is weak how can they survive damaged. The ones who are damaged are not only survivors but the most powerful of all as they know how to survive.

Also Read : 10 Things Every Woman Should Do Alone At Least Once In Her Lifetime

She may have faced scars, wounds, the most traumatizing moment but still, you won’t see her breaking down as every moment she faces such a situation she gets up and fights back. She is a fighter, a warrior who is ready to fight any kind of battle. Since birth, she was given various reasons to give up, various reasons to shy off, scared off but it seems her ear never focused on it, her mind never agreed to take it in. The more she was suppressed, the more she raised. The more she was asked to give up, the more she chooses to rise up. The more fear tried to touch her, the more she walked near courage, she didn’t run but faced it, she didn’t give up but took it all up. She rose and rose in freedom, she rose in bravery.

Dedicated To Those Powerful Souls

Her nightmares were scary, a few even turned into reality. But those scratches can’t ask her soul to run from reality, it has taught her to fight it and come up as the fighter. Nothing can make her weak, nothing can make this powerful mind suffer in peak. She is meant to shock the world with her powerful mind, surprised the world with her creativity and shattered those ignorant minds with her powerful attitude. She is the most powerful soul.

Also Read : Swapna Barman, The Zeal To Live Her Dream Gave Success Even In Her Pain

She was told she cannot do this, that, but who are you to command those souls who were born to strive for success. She doesn’t need any motivation from outside as motivation lies within her, the outside world seeks motivation from her.

Also Read : 7 Causes For Sudden Hair Loss That You Should Know

She creates her own opportunity and takes a dive with it to convert it into success. Maybe those devil minded was successful in tearing her apart, tearing her into pieces but they never ever thought that she could collect those pieces and be the most powerful person ever. She might have gone through envy, greed, hatred, by those ignorant evil people that surround her, they told her she is damaged to live again. But she made them watch that a lioness is always a lioness no matter what. She wore her crown of bravery and made the world to treasure it in silence, she came up with the victory.

Also Read : 5 Ways As To How To Get Back On The Right Path

Why Damaged Women Are The Most Powerful Person?

The damaged woman have the most strength as they could withstand every storm that came her way and nothing could uproot her. She could stand it being firm, being bold and she came out as the most powerful person. Now, she has created her own world, a world which knows how to value her worth, a world where her silence was given a voice, she created and transform as no one could ever do who never knew the pain of struggle to survive.

She is the voice of the voiceless, eyes of the blind who closed their eyes when injustice against her need their voice, their vision. She can turn those cold, harsh words as her sword, those scars as her crown, and is ready to face and rule the universe once again.

Also Read : 5 Most Fun Zodiac Sign You Will Love To Be Around With

Pull back her steps if you can because those damaged souls are not ready for the same. This time, she has a sword and a crown, she has become the most powerful person. She has gone through many flames, this time, it is her turn to burn people with her success, you can burn in jealousy. As these women have gone too far to strive for success and it is hers and only hers. She is ready to live like the way she deserves to be.

Also Read : 10 Aries Good Traits That You Need To Know