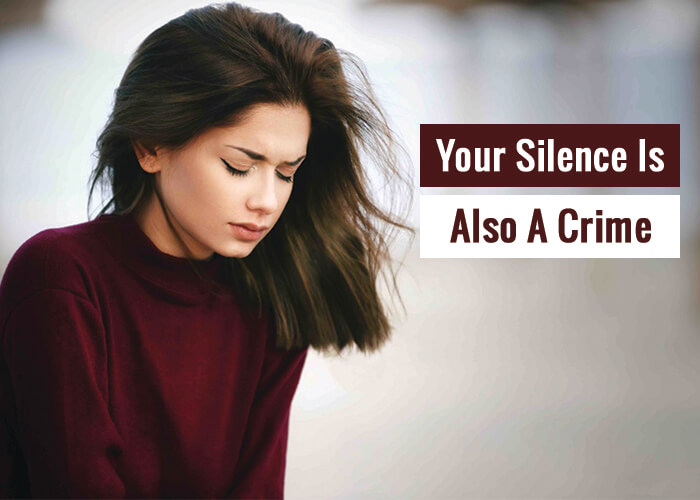 A few days back I was sitting with my friend Ariti in a restaurant, Ariti informs me about her cousin Sister Kriti. She told me, Kriti is in severe depression. Actually, all this started after her marriage. Ariti further told me, within a month of Kriti’s marriage, she seems bit unhappy and she often visited and stayed with her parents.

One day her parent’s too noticed and wonder why their daughter seems unhappy, so they get curious about it and asked her about it. But she didn’t reveal anything, so her parents forcefully asked her, then with great difficulty she somehow reveals about her sadness and told them, Her husband and her in-laws often hit her and ask for dowry. She never informed her parents about this before because she doesn’t want them to take tension regarding this issue.

I advised Ariti that they should take help of police regarding this matter and file an FIR against them. She told me, already filed an FIR and police is enquiring regarding this issue.

We women don’t want to see our parents worrying about us, so we often hide things from them and resist all the pain within us, whether it’s a domestic violence or a rape. Sometimes we may share our problems with our parents but we think this would not help as they have the fear of society – “What will the society say them?” or “How will they face the society?”

I think it’s with us, whether to fight for our right or not. We often dream someone who will come and fight for us, but life is not like a fairy tale – suddenly an angel will appear and change our entire life with magical powers. But in reality, we have to be practical and fight for our right and also try to convince our parents to fight against any injustice. Even if they couldn’t support us, we need to fight alone, after all – It’s Our Life.

Don’t forget that “Your Silence Is Also A Crime”, A Crime That You Are Giving To Your Body And Your Soul.

Read This : Don’t Worry Girls Because Everything Happens For A Good Reason