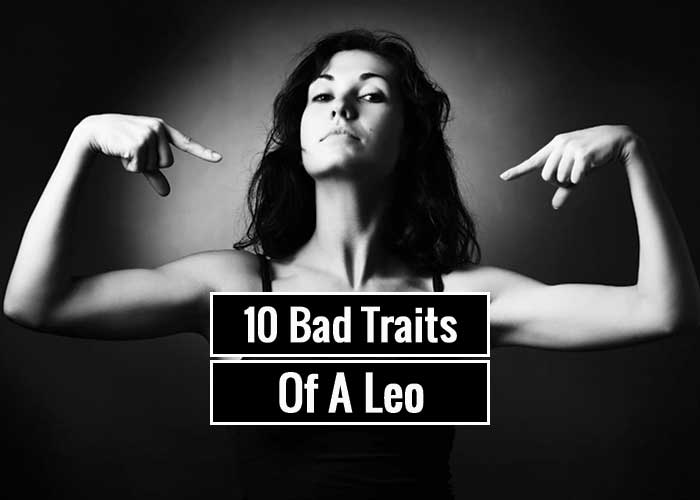 Leo love rejoicing the fame of being in the spotlight and they celebrate themselves. They have traits of a lion and are born natural leaders, they enjoy cultivating friendships as they love socializing, and romances that are artistically and creatively inspired. They have a charming personality and love to spread their charm but along with these positive traits, Leo has a number of negative traits.

These are some of the bad traits of a Leo:

They are headstrong in nature and convincing them for a particular reason can be very difficult, as they are opinionated in nature as well and love to stick to their own point. They may not want to listen to your point or to agree on it.

They have a huge ego, which is very fragile and it often gets hurt. It is one of the hurdles that come the way of Leo’s success. It often pulls a Leo back from their way of success and one of the bad traits of a Leo.

When they see someone more talented or people with more potential, they tend to feel jealous. Since they are competitive in nature the success of others brings jealousy to them.

They are not only egoistic but arrogant at the same time and this makes them very rude, they tend to behave in a rude manner with the people around and it is considered one of the bad traits of a Leo.

Also Read : The Most Annoying Zodiac Signs Of The Zodiac Family

One of the impatient zodiac sign is Leo, they want everything now and waiting or being patient is something they never prefer to do. Their restless attitude often results in anxiety and their failure sometimes. This is one of the negative traits of Leo.

Also Read : The Most Lazy Zodiac Signs Of The Zodiac Family

As the king of the jungle, even Leo wants to control everyone and every situation and they want people to follow them. They are very dominating in nature and it is the reason people often don’t want to stand around this zodiac sign.

They think that the world revolves around them and they are the center of attraction. One of the bad traits of a Leo is that they think they are the superior of all and nothing is there more than their self-importance.

They think about themselves first before thinking about anything. They can be very selfish and self-centered at the same time when they are at a competitive level.

Also Read : How To Attract A Leo? Find it out

A Leo is like a lion it can tear a person when needed and their anger is something that is hard to imagine. They can be very revenge-seeking when they are hurt. It is considered to be one of the worst traits of Leo.

Also Read : Zodiac Signs Who Are Least Likely To Get Cheated On