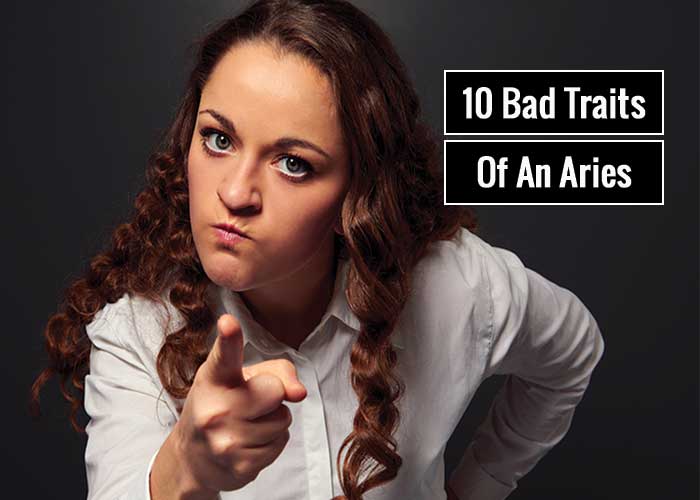 Bad Traits Of An Aries

Aries people are considered to be the most arrogant of all, and this arrogance usually ends up hurting the sentiments of others. And it is considered to be the worst traits of an Aries. They are insensitive to the emotions of others as they have that feeling that they hold more knowledge than anyone around them.

Also Read : How to Attract an Aries Woman? Find it out

They can burn in anger and can be the harsh person ever. It usually says that they don’t have control over their anger and burst out on the people around them.

Also Read : Zodiac Signs Who Just Love To Live In The Moment

If they say they will do it means they will stick to it. They are very stubborn in nature and it makes very hard for people to handle them at times.

Also Read : How To Attract An Aries Man? Find it out

You can find them running here and there being restless. When it comes to patients they lack it as they don’t have that temper to wait for, if they want it now means now. In a word, they are very hasty in nature.

Also Read : How To Love An Aries

They are not at all organized and discipline. They are very indiscipline people who are very unorganized in most of the things, they do.

You will see they try their best to win an argument at any cost and they enjoy it. Sometimes you will feel that they love arguing no matter whether they are right or not and in a very aggressive manner, it is a very bad trait of an Aries.

When it comes to winning, Aries can get up to anything. They are very competitive in nature and always look into the move of their competitors. They love competing in any kind of race.

Also Read : Zodiac signs Who Are Least Supportive In A Relationship

They know when to revolt and how can turn out to be very rebellious and don’t listen to anyone sometimes. It’s very hard to deal with an Aries and is considered to be a bad trait of an Aries.

They are very restless in most of the situation making things go in a very messy way.

10. Enable to walk in a direction:

Also Read : Zodiac Signs Who Will Love You Forever Till The Last Breath