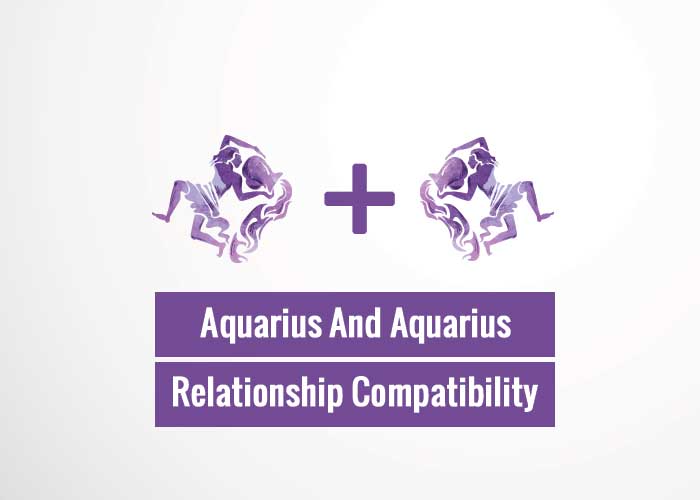 Well, Aquarius and Aquarius relationships can be more like a friendship. These two pairs of the same signs will have a lot of difficulties in their relationship. Aquarius is tough to beat down. They like to be on top. They like challenges and fun but are often a little immature when it comes to building a love relationship. So if these two same signs come together, the same energy about them may repel each other and create conflicts, especially forming a bond. Their ego can hurt pretty easily. They are damn sensitive who will react and burst out if things don’t go the way they want. However, these signs can build a fun environment and use their sense of humor and try to start from friendship, their relationship may work. To know more about them let’s go through Aquarius Aquarius relationship compatibility.

Aquarius is very picky. They have this innate ability to impress people with their charms. They have a good fashion sense that’s the reason when these signs meet each other, they are likely to have interest in them. Their sense of humor is something that will bring them closer. You know, like laughing and having fun. Their similar nature will help them to pull each other. It won’t take time for them to be madly in love.

Aquarius and Aquarius relationship compatibility says that when they talk, they will have an electrical connection, and ideas will fly from side to side as if the conversation was their playground. We even got it that they are humorous and like to crack jokes. But communication isn’t always about laughing and rolling down the floor. Aquarius likes to act aloof, even though they know what they are doing. They don’t like to pick complicated stuff. They like to escape. Because of it, there can be a lot of miscommunication between these two. They don’t like when someone disagrees with them but they are the ones who always contradict. So having these two same signs together can be a risk.

Just like the air, they are always everywhere. They don’t like to settle down somewhere. Their mind is never at peace, they hated being vulnerable. That’s why in order to control emotions they act cool and run their mind now and then. Aquarius is not the sign, who is understanding. They are as stubborn as hell. They like to prove their point right. Because of it, they are unable to process and understand themselves and the situations. So they are quick to judge each other.

Aquarius and Aquarius relationship compatibility says that emotions are their worst enemies. Since they neglect their vulnerable side so much they will have a hard time dealing with complicated situations. But they are so quick to mood swings that is why they will find some way or the other to put that temporary bandage on their wound. And they will again crack jokes even in such situations to break any awkward moments for them. So there cannot be emotional bond stronger in between these two signs

If these two same signs come together to form a romantic relationship. They will not be able to be loyal to each other. And also they can’t trust each other completely. Together they are so doubtful because trust is something that can be built after having an understanding between two people and knowing their sides. But if they haven’t known their different sides of each other, how are they supposed to form a trust. Because of their argument and egotism, they will have difficulty in having trust in their partner.

Aquarius and Aquarius love compatibility says that they can be very interesting, full of new experiments and passionate action. They both will be able to fulfill each other’s fantasies without any repression. But they will find an obstacle in emotional bonding that could present itself through a general lack of intimacy in their love life. This couple will have trouble fitting in the usual stereotypes of sexuality and will rarely understand the usual taboos and restrictions other people tend to impose. But this won’t quench the desire they will feel when they are truly attracted to each other, but they could be too detached for any of the partners to give enough warmth or focus to their relationship. If they are both looking for an occasional fling, this might be the best contact of signs in the entire zodiac to have one. Unfortunately, this is usually not enough to support their future together and they will both probably need someone they could love more and who would care about them in a different way. So if they move ahead with this notion, they won’t be able to satisfy each other in their sex life.

Overall, the Aquarius Aquarius relationship is filled with the easy flow of conversation because they understand each other so well. Their intellectual connection will add charm to this relationship. One of the best parts of their relationship is that though they deeply care for each other, there is no trace of possessiveness. It is only their egos that can really be the reason for a great deal of unpleasantness in their relationship leading to bitter conflicts between their personalities. But they can overcome it, and the best remedy for such a situation is for both of them to relax, sit back and allow each other enough intellectual freedom that they want. This will help them to be in a healthy relationship.