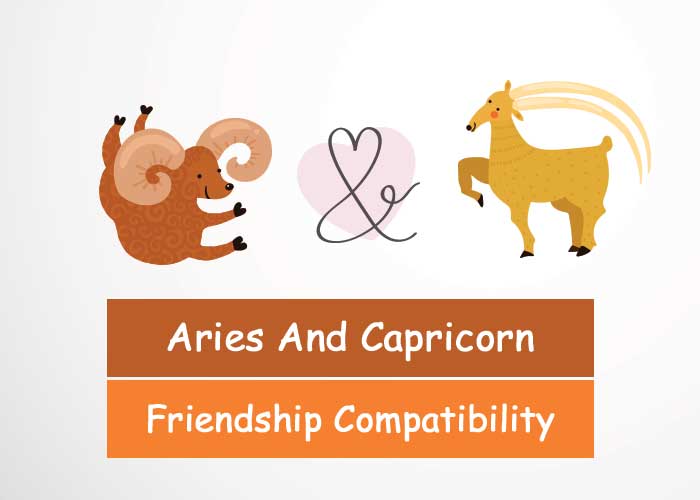 Aries are powerful and courageous signs of the zodiac. Capricorns are known for their determination towards their task and the steady approach they undertake in their way of life. Capricorn is very good at offering support and motivation. And Aries can help their friends to have a more exciting life. When the two comes together their friendship can be strange because of the difference in their personality. Aries always looks towards the future, whereas Capricorn prefers to analyze the past. To know more about their friendship lets go through Aries and Capricorn friendship compatibility.

Their conversations will be filled with ambitious talk as they both are ambitious and competitive in nature. They can have great communication. But Aries’s impulsive nature and their rush to finish a conversation may affect patient Capricorn who loves to move steadily. They can even get stuck in ego battle as they both may end up hurting each other while having a conversation. But apart from that, they will have a balance of communication in their friendship.

Capricorn and Aries’s friendship compatibility says that they will lack mutual understanding. They are both cardinal signs. Their lack of understanding will even create a lack of emotional bonding. The fact that they both don’t have the same values may even create problems in this friendship. Aries prefer the quicker, easier, riskier approach to get things done, while Capricorn takes the slower, harder, and safer approach. They may find it difficult to understand each other in many situations.

Aries is a fire sign and Capricorn is an earth sign. The way they express their emotions is quite different. Aries may feel but may not express and Capricorn might express but not feel it. As friends they may get trapped in this difference. They both are very practical in life. Expecting emotional connection at the beginning may be disappointing unless this friendship takes a turn where they can have a strong emotional bond.

They are opposite poles. If one is optimistic, the other is pessimistic. But despite being opposite to each other, they will spend time together doing the same things. They will motivate each other to do things that they never did. This will make this friendship grow strong. And even turn Aries’s interest into Capricorns and vice versa. Their opposite traits will complement Aries and Capricorn’s friendship.

They are very loyal signs as couples. Aries and Capricorn are both loyal as individuals. But this friendship may lack loyalty. They will be busy proving and competing with each other that they will forget loyalty somewhere. They are dependable, reliable but one can’t say that they will never betray. In order to climb the ladder of success they may end up betraying each other. If they look at their friendship beyond competition no doubt this friendship won’t lack anything that can make this bond weak.

Overall, Aries and Capricorn friendship will get along much better when they accept each other’s well-defined role in their friendship. They love to compete. And they won’t mind if they have to compete with each other being friends. Their shared interest, their fun and enjoyment will be on different levels. They may suffer from trust issues due to competitive nature but other than this, Aries Capricorn’s friendship will be beneficial for both. And will be one of the strongest of all.