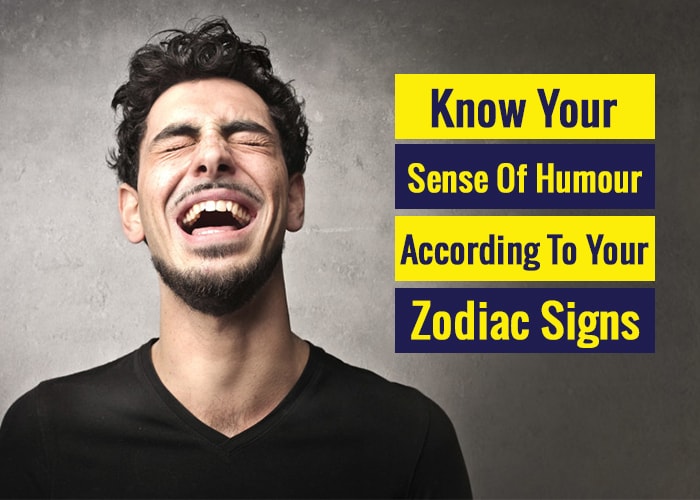 Every individual has a different sense of humour and it’s obvious that your star sign has a huge effect on how you make others laugh. So, here you will know what is your sense of humour according to zodiac signs.

These natural comedians will go out of their way to make a group of people laugh. Their humour leans more on the sarcastic side, and sometimes others won’t get their jokes because they’re too “inside.”Aries loves to laugh, even if they’re the only ones. Their humour can turn dark, though, and they could start making some mean remarks about people’s looks to get some laughs.

The bulls have a very specific sense of humour. It can be dirty and too much for some people to handle. Basically, they won’t call “earmuffs” before saying something totally nasty, and if you aren’t into that humour, you probably won’t appreciate it. But if you like laughing at naughty and dirty stuff, they’re the ones to go to. Think of Taurus as the friend whose jokes you never told your parents because you knew you wouldn’t be able to hang out with them anymore.

Geminis take the tough times they have in life and make jokes about them. They’re actually pretty relatable, too, which makes them the stand-up comedians of the zodiac. Misery loves company, so the rest of us get a kick out of the real-life woes that Gemini usually groans about. They do it in such a way that it won’t seem like a pity party.

Crabs are an emotional bunch, and they care a lot about how others feel. They’ll make jokes, but they won’t be everyone’s taste.n a general sense, Cancers don’t usually come off funny to that many people. Sure, those who love them will most likely enjoy their humour, but if you’re looking to laugh, look elsewhere.

The lions are charming, and part of their charm comes from their ability to put a smile on people’s faces and a laugh in their belly. In fact, they need laughter in their lives. Leos want to make you laugh; it’s their natural instinct. They care if you’re happy and having a good time, and they’ll go out of their way to make sure you’re giggling like crazy around them.

It’s crazy to think, but these perfectionists actually do bust out some laughs every now and then. In spite of their constant judgment of people, they laugh. However, they’re mostly laughing at you and not with you. They take things pretty seriously in life, but they’ll seek out a good laugh when they need one. Unfortunately, it’s usually at the expense of someone else.

Not every Libra is confident in their ability to make others laugh. Some Libras have no filter and just go for it, while others hang back, afraid that others may not think what they have to say is funny. You’ll be pretty amazed at how much a Libra can really make you laugh when they have the courage to go for it. If you have a Libra friend who is a little nervous to share their jokes, encourage them!

These are the scary moms of the zodiac: you’re pretty much always going to be afraid of going against a Scorpio in any situation. They’ll almost always make sure they have the last laugh. Don’t get too involved with the jokes they give. Definitely laugh, but remember to always laugh with them, never at them.

These are definitely the jokers of all the signs. They aren’t really comedians because no one always understands the humour of a Sagittarius, but they’re going to make their jokes whether you like them or not. That’s how they are in general. They’re clever, cunning, and smart at the heart of everything they do.

Capricorns are witty in general, and their humour tends to be more sarcastic. They can easily offend, and they know how to come up with the perfect insult. They insult so well that if you can move past what they actually said and take it with a grain of salt, you’ll find yourself rolling on the floor.

The ideal humour for an Aquarian is in the form of pranks, so get ready to be pranked! They also deliver practical jokes. These are the people who truly enjoy watching movies crime movies because they get a real kick out of seeing people in pain, physical or mental. They’ll sacrifice one person to make the group laugh, so keep your eye out.

Pisces jokes may be funny, but they’ll come in and undercut it with something that is sure to turn those smiles upside down. They really want to laugh, but they’re so happy that they just can’t help it. It’s hard for them to just laugh things off in life, so unless you want to cry, go to someone else.