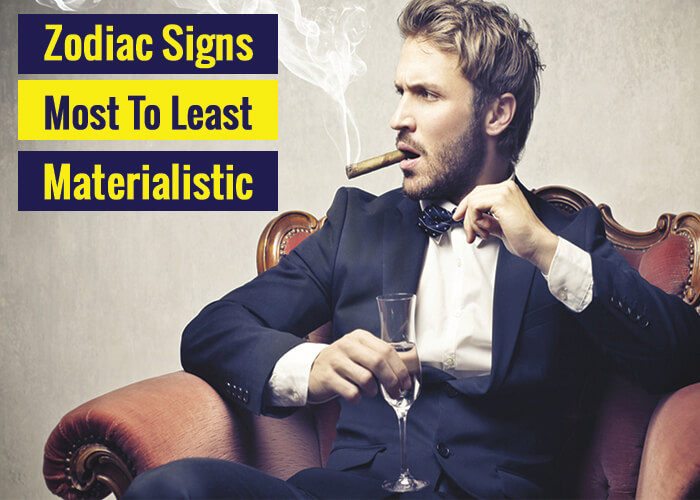 Every Zodiac sign has a different way of spending money, as some like to spend money like a drunken sailor while other always make sure to save enough for a future time of need. So, here we have listed Most To Least Materialistic Zodiac Signs. Scroll down and have a look at the zodiac signs that are materialistic.

Most materialistic zodiac signs – Taurus is the sign who get attracted to all the charming stuff. They just don’t feel embarrassed to spend. Actually, this is the sign who carries their materialism very gladly just the way a celebrity wearing a brand new and expensive stuff every day. These individuals consider spending some profits of their hard work on themselves. This is also the sign who are well known for the fact of being obstinate, and well materialism plays very well to this nature of theirs. When a Taurus has an eye on something that’s very attractive to them than it’s very hard to convince them not buying that stuff.

This is the fire sign whose symbol is the lion and obvious they live like Kings/Queens of the Jungles. Leos also fall in the category of the most materialistic zodiac signs. They are passionate creatures and similarly, they are passionate about materialism too. They just like to spend openly without any hesitation. This sign is very different in the matter of spending money, they view their materialism as a very good thing. They just randomly spend their well-earned profits on expensive stuff and has a belief that “showing off” means getting rich than the other person, and they don’t mind telling their friends the actual price of their things when they have been asking about. This is the sign who has no regrets about their incredible materialistic nature.

This is the sign who come first in the world of Astrology. So, Aries just like to win every other sign and be first in everything they do, even related to materialistic things too. Being a winner is what they love, whether it’s buying the latest gadget or buying a new dress of the latest fashion in their workplace, Aries just do it first. They have no hesitation spending a large amount of their money in an urge to win. Aries is the third most materialistic zodiac sign. Aries carries the attitude of “Who is the boss here?” Well, “I’m the boss here” and are not embarrassed to spend the part of their minimum wage to pamper themselves with luxurious stuff.

Fourth most materialistic zodiac signs – Pisces. This is the sign who just loves materialism. It’s never hard for a Pisces to get overly excited about shopping, mostly while dealing guilty pleasures of life like buying a new outfit and “Me Time.” You are absolutely on the right path – Yes, this is the sign who loves to visit spa and beauty salons and is not really scared to spend some of their bucks to go for their relaxation time. This sign needs to be very cautious as they frequently wind up spending money like a drunken sailor.

This sign is extremely adventurous, so they have different taste of materialism as compared with other Zodiac signs. Sagittarius doesn’t have time to shop, so they hardly spend money on clothes, as they are always on the rush. Rather they spend most of their money on luxurious encounters and journeys which will take them to faraway lands and countries and this often shatters their bank balance. Money is not that important for a Sagittarius when adventurous are involved. They are well known for their impatient and restless nature and this highly causes them to make reckless materialistic decisions.

This sign really doesn’t have great performance history while dealing with materialistic things. The reason behind this is their innocent and youthful nature. This nature of theirs often puts them in difficulty while dealing and making bills. Partly that begin with guilty pleasure often end up with zero balance. Geminis gets overexcited especially when their childlike nature arises and in such a situation, they often end up spending money like water.

Capricorn is the sign who just loves shopping until they get physically tired and cannot walk around the shops anymore. They have a superb choice and only get attracted towards excellent stuff, and this is their greatest weakness and it’s the fact. Although, being the Earth signs they genuinely know how to stay stable in life, So spending money extravagantly is not a big issue for them. They just love to pamper themselves with lavish items but is also smart enough to know when and how to control their overspending nature.

Cancer has a very specific way of losing their materialism. This is the sign who just dream about having their own house and more than anything in life they give much importance to this dream. So, you shouldn’t get shocked to know that they spend most of their money on this. They don’t mind walking extra miles to have an attractive and pretty home of theirs with luxurious furnishing. They even wanna feel comfortable and they don’t mind having the most costly PJ’s. Everything that’s makes their home look beautiful and expensive touches the heart of a Cancer. After all, they are not only pampering themselves with this, they even want their family and all the people who visit their place to feel comfortable and lavish.

Aquarians are loving by nature and they are firstly humanitarians. Although this signs really loves to pamper weird part of theirs and they often express this with bold fashion. Aquarius doesn’t like to appear inexpensive after all they are the trendsetter. It’s the fact that the nature of Aquarius usually believes that the things they do are to bring change in this earth for the betterment. Although we will not completely disagree with this when it comes to their fashion choice, they should get a few points for their good nature.

It’s very difficult to see Scorpio pampering themselves with materialistic stuff. Although at some point in time they really love to spoil with lavish. Scorpios give more importance to managing and saving. As compared with other signs Scorpio are not fond of spending specifically on themselves, however, occasionally they just love to go big. This sign will not spend money till they have saved adequate amount, but once they have enough of it then they will go for something expensive, like buying a house or car of their dreams. They don’t like rushing things and always make sure to spend on things they really need. That’s why Scorpios are called the most powerful and sharp sign in the world of Astrology.

What to Say about Libras, they are daydreamers who choose to daydream about having a better life than actually pampering themselves with materialism. That’s the main reason why they have listed as one of the least materialistic zodiac signs. The symbol of Libra is scaling which makes them the most Balanced sign of the Zodiac and that’s the main reason why they are very good at balancing and budgeting their wealth. Sometimes Libras loves to show off, but you will glad to know that they have saved enough for a future time of need.

The least materialistic zodiac sign – Virgo. This earth sign is so simple, mundane and practical by nature. So, that why they are listed as the least materialistic Zodiac. They find happiness in simple and small things and has a belief that in order to cherish oneself money is not necessary. Virgo gives more importance to mankind rather than assets.