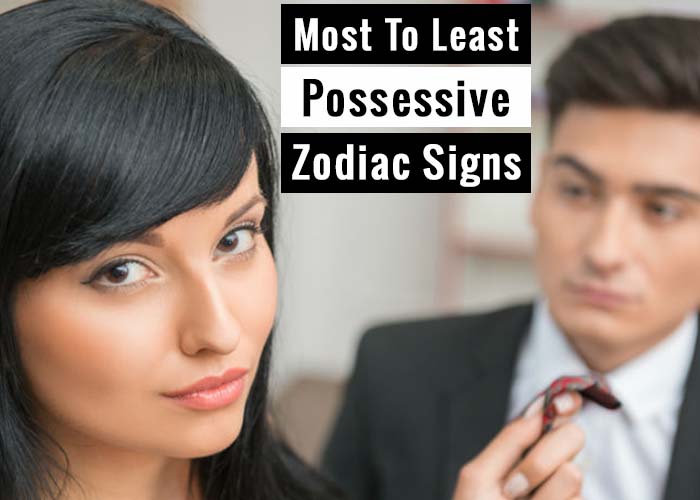 Below is the list of most to least possessive zodiac signs.

Aries, most possessive zodiac signs You girls are so possessive that you hold onto your partner with the great aggression. You must possess and own your partner entirely, and you experience extreme anxiety if you can’t. You’d wrap your arms around your partner forever if you could. You even don’t mind to put handcuffs yourself with your partner.

Scorpio, most possessive zodiac signs When you’re deeply in love, it causes you tremendous emotional pain to be without your lover for a minute even if they’re on the toilet! Domineering and controlling, you tell them to get rid of all their friends and to never make contact with exes. Whether or not this suffocating method works depends entirely on whether your lover actually wants to be possessed.

Taurus, most possessive zodiac signs You girls are a mini-dictator by nature, when you are in love you claim your lover’s entire body and soul. Even if you even see them talking to someone of the opposite sex, the flames of jealousy shooting out of your ears are visible from across a crowded room. Pro Tip: Your insecurity is at the bottom of all this. You are among the most possessive signs of the zodiac. If you were a little more comfortable with yourself, you wouldn’t need to make your lovers so uncomfortable.

Gemini due to your suspicious mind, you interrogate your lover about their whereabouts. You’ve had your heart broken too many times to ever trust someone entirely. So instead, you make them uncomfortable to even breathe. Your overbearing nature actually leads to infidelity, because people feel that if you’re going to accuse them of cheating, they might as well enjoy it.

Cancer, get involved very quickly with your lover. You get nervous when he plans a night out on the town with the guys. And you’re aware that none of this makes you look good, so you cover it all by acting aloof. What—he’s going out drinking with the boys? Like you care! Huh! You don’t care at all! You couldn’t care less! You care so little, you’re going to curl up in a ball in the shower and cry the whole time he’s gone.

Leo, you girls are only possessive about people you just can’t live without. If you’re only mildly interested in someone, you could lose them while shopping at a mall and not mind if you never heard from them again. But if you’re head-over-heels, if they wander into the sporting-goods section for five minutes and you can’t find them, you can best believe that the security guard will be making an announcement over the loudspeaker in an attempt to reunite you with your long-lost lover.

Capricorns are always a bit aloof with your lovers, being careful to never show them you care too much or too little. Even if you’d be reduced to a sobbing puddle if they were to leave you, you have too much pride to ever let them know that. Instead, you keep it cool. But that aloofness often is nothing more than a mask for a codependent soul—and that’s OK! You’d be better off if you were a little more possessive, or you would have never lost that one guy.

Pisces, you girls have only been jealous and possessive once in your life, and that was with the person you loved more than any other. But by your own manic possessiveness, you drove that person away. Ever since you’ve been extremely careful not to come off like a bunny-boiling lunatic with men, no matter how strongly you wish to claim total ownership over them. So you’d like to be possessive, but now you realize it can backfire badly.

Virgo, you girls are romantic and want to claim total ownership over every inch of your lover, but you don’t want to be a pain in the ass or a nag, either. You could easily be possessive, but you’re too polite. You don’t like to harass people. So as much as you’d be naturally inclined toward possessiveness, it’s kept in check by the fact that you’re basically a nice girl and don’t want to drive a guy away.

Libra, even if the love of your life dumps you, you’ll be hurt for about an hour and then nibble on doughnuts while cruising Tinder. In fact, the minute someone loses even a slight bit of interest in you, you completely lose interest in them. If someone you’re dating shows even the tiniest interest in someone else, you’d gladly drive them over to that person’s house and bid them goodbye. To you, completely possessing someone is an unwanted chore, like watering that plant you didn’t want that someone gave you as a birthday gift.

Sagittarius, least possessive zodiac signs you girls tend to view any sappy ideas of “true love” or especially “lifelong love” as silly and dumb. It sounds like slavery to you, and you want freedom. There’s a huge world out there and at least—what?—500 million guys on this planet you’d find attractive? The moment you set one butterfly free, there’s another butterfly waiting for you to capture it.

Aquarius, least possessive zodiac signs you are as free and aimless as the wind. You let people, even ones who get very close to you – slip through your fingers like grains of sand. You don’t like to make commitments, and you don’t expect them from others. You’re not possessive and you don’t want to be possessed. This is why you often find yourself alone and liking it.