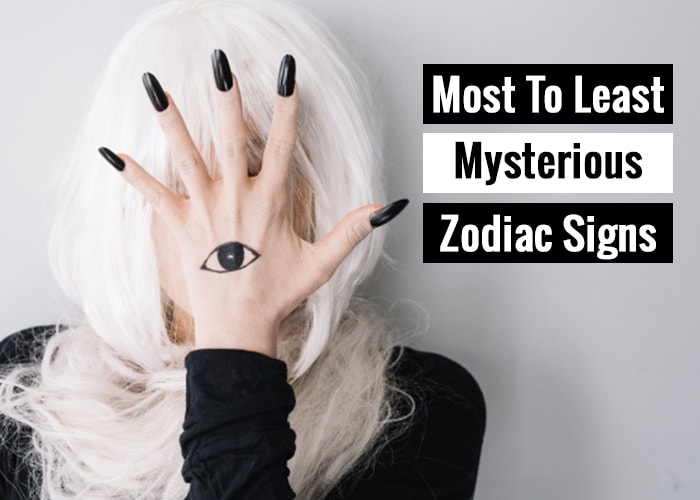 Scorpio, your mystery is your charm. The fact that people can never read what is going on in your mind or your constant connect and disconnect with the world is what attracts people towards you. If there was a zodiac sign party, Scorpio would be the one hidden in a dark corner yet have everyone’s attention on them. While your mysterious personality is a plus for you, it can be harmful to your friends and family, every time you isolate yourself. That’s why Scorpios are considered as the most mysterious zodiac signs.

Also Read : Good and Bad trait of each zodiac sign

After Scorpio, it’s Pisces that is the most mysterious zodiac sign. Pisces, the dreamers, are known for their intuitive and artistic self. Being a water sign, Pisces can slip in and out of various phases. This is not a conscious change they bring about in their personality, it just happens like the flow of a river. Most people never know what and who a Pisces truly is and chances are they hardly can keep up themselves!

Cancerians are ruled by the moon which in itself is a symbol of mystery. They are known to be ruled by their emotions and hence, have an alluring yet puzzling personality. So one day when you might see a Cancerian completely independent and in control, the next day you might see them struggling with life. Cancerians are the third most mysterious zodiac signs. Despite their representation with a crab symbol, Cancerians are actually quite soft on the inside which makes it hard for them to open up to the world… Especially when they are in a relationship with the opposite sex! They tend to hide their feelings from the world.

While Virgos are generally an interesting zodiac sign with a knack for healthy and clean things, there is one thing about them that makes them mysterious – their jealousy. Believe it or not, you do not want to make a Virgo jealous. Once the negativity takes over, they’ll be obviously unhappy and also keep you in the dark about what is causing their unhappiness. And trust us, they don’t make this mystery easy to solve at all!

Capricorns are high-achievers in life and business. They are highly ambitious beings, always aiming for more. Their one and only fear that can take a toll on them is failure. What follows when a Capricorn feels like they have been unsuccessful at something is isolation. No one can say why they end up isolating themselves for the failure because it exists only in their mind, not the world. However, this “hard to figure out” trait of theirs certainly end up making others want to solve the mystery!

You are in a 50-50 position when it comes to being mysterious, Aquarius. At one hand you are a born leader and trendsetter but on the other, you very often, find yourself in the predicament of having to change your personal values. Sometimes you keep your emotions aside for so long that you forget the way you truly feel about something. You embrace being mysterious only when you fear being hurt.

Taurus, you are a calm and cool sign but that does not mean that there isn’t a greater depth to you. Even though you are good at socializing and having fun with the crowd, you probably won’t be the first one to be opening up about your personal life. It is only after you let them in that people can guess what actually goes in your mind and it is truly a hard task for people to get into your trust circle.

Geminis are natural crowd-pleasers. You love to talk and like to please everyone you meet along the way. This however, restricts the amount of information you share about your life with people because you like to give out the impression that you are happy and stress-free. You are like an onion that needs to peel one layer at a time to really reach the core of your mystery.

Leo, you are the sunshine of positivity. Love is known to be your ruler and your happy-go-lucky nature hardly leaves any space for mystery or darkness. You trust a lot and you trust easy, but you are not one to be fooled. Once broken, you find it hard to connect with the same person again. However, one thing that can bring a mysterious air to Leo’s life is when their pride is hurt. As soon as you hurt Leo’s ego or insult their pride, you’ll be left to solve a mystery you didn’t sign up for!

As it turns out, Aries, you have your mystery charm on the low. Since you are such an independent, active and outgoing personality, it’s hard for you to build a mystical aura around you. That’s not a bad thing, however, because it makes it easier for other people to approach your warm and dynamic self.

A Sagittarius is the least mysterious of them all – but by choice! They are a jovial and charitable personality with strong will-power and an ability to influence others. You ask a Sagittarius and they will lay their heart open for you as long as it’s the right time!

Also Read : The 5 Most Powerful Zodiac Signs: Are You One Of Them?

Librans are extremely thoughtful and generous beings, spreading love and romance around them. Even though they can be a bit gullible and can easily find themselves on the wrong path, mystery is not their strong suit. They love to talk, about almost everything and anything and are never too great at hiding things, especially from their close friends and family. That’s why Librans are considered to be the least mysterious zodiac signs.

Also Read : Ranking the zodiac signs by who is most difficult to love