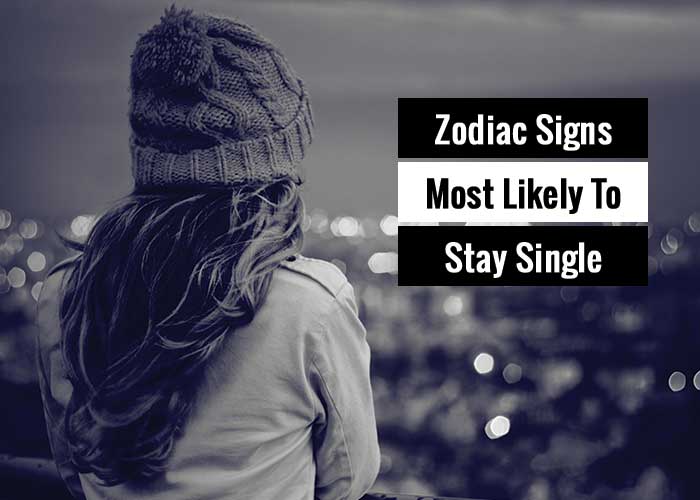 We normally think that God has created that special someone for everyone. And this is true. However, there are few individuals who want to relish their life individually as they feel fine at it. Also, they further have issues in dealing with others. Even Astrology listed particular zodiac signs who choose to live their life on their own. So, spot out, which zodiac signs are most likely to stay single and why?

If you are going out or dated a with Gemini, It always seems like you are going out with two separate individuals and that is most probably how it actually is. That is the reason if a Gemini chooses you it doesn’t imply that tomorrow he/she won’t change their opinion and seek for another person somewhere else. They always change, and that is something that many people won’t tolerate. This is why, this zodiac sign most likely to stay single.

Also Read : How Your Zodiac Sign’s Relationship Might Change In 2019?

Also Read : Why the zodiac signs are still single? Find it out

The obligation with Aries is that they are too quick in losing their temper and expose truly mean things. Majority of the people don’t feel right with this constant hostile and unfriendly behavior and this is the reason that makes Aries the most abandoned zodiac sign.

Also Read : 2019 love life prediction for all the 12 zodiac signs

Do you know what makes Taurus most alone zodiac sign? Well, as we know Taurus is extremely resistant and determined. When they set their mind on something they are never prepared to change, the word compromise is not found in their dictionary. THus, once they make their mind about something, no force can stop them. This is the main reason that others don’t fancy to be with them. Eventually, they end up staying single.

What do you think is the reason that makes Pisces most likely to be single? Especially, Pisces are self-destructive and even when everything is fine, they assume it isn’t. They will by hook or crook ruin what they have since they do not deserve it. And, making them a very troublesome choice for everyone.